Last time on Oblivion Adventures, Shush’Ogar met surprisingly competent resistance on his latest relic-snatching heist. They were all nonetheless turned into unsurprisingly dead resistance, at least as far as he could tell. We rejoin our orcish adventurer back in the imperial city...

“You’ve done it!” he said. “You’ve actually managed to recover the high fane! Magnificent! May I please see it?”

Shush handed over de rectangle-thingy covered in squiggly lines an de fancy elf seemed real happy about dat. He turned it over in his hands a bunch an traced de lines, mumblin to himself under his breath.

“Astounding, absolutely incredible, this is just...” de elf paused an looked up. “Is that blood?”
Read more »
Posted by Genericide at 6:10 PM No comments:

Four weeks ago, I wrote an article about Undertale and Completionism, and in it I briefly mentioned a game called Bravely Default, grumbling about it having filler. Three weeks ago, I finished playing Bravely Default, and decided it was time to voice opinions that had been bubbling over a saga of a hundred hours. Two weeks ago, I wrote about the good in Bravely Default, of its marvelous combat and its magnificent music. One week ago, I discussed the story of Bravely Default, my tone slowly souring in the face of thoughtless clichés and disconnected, diminished side quests. This brings us tumbling towards that land on the precipice of both the foreign and familiar, the present. Ladies and gentlemen, we have, in all senses of the word, reached the endgame.

And with it comes one emphatic warning. This post will not just contain spoilers. No, it will contain MAXIMUM SPOILERS. Should you choose to read on, you will be like a barrel of fish shipped to Kansas in a sunbed. Like a child whose parents buy him every Amiibo, Skylander and trading card on the market. Like a banana with a peel black as the deepest abyss. SPOILED, SPOILED, SPOILED, down to the very core. Everything is on the table, and that table is under a spotlight of a worldwide live television broadcast. If you have any ambition of experiencing the late-game revelations of Bravely Default for yourself, turn back.

Well, uh, maybe not literally. That would make it hard to operate your computer. Just navigate to a different webpage, I guess.

Let it never be said that I am thoughtless with plot details. Here is that warning one final time:

Bravely Default: Story and Side Quests

Last week I opened up a new series on Bravely Default, and I started things out pretty positive. This is key to keep in mind, because it’s all downhill from here. This second post will focus on the writing of the game, and will feature MINOR SPOILERS. Specifically, I’ll be going into various details of the story and spoiling some mid-game side quests. However, all the major plot twists and late-game story will be saved for a third and final post. It’ll take some effort to avoid talking about them, but they deserve their own time to shine (or, uh, the opposite of shine. Absorb light?). Let’s dive right in with a basic overview of the story.

Stop Me If You’ve Heard This One Before

The writing in Bravely Default isn’t terrible. It has some neat ideas and there’s some untapped potential, but the execution is questionable from the moment you open the game. It begins with a couple brief cutscenes that, even in retrospect, contribute absolutely nothing. This video shows the introductory scenes, but the actually important ones start at 2:30, with one scene for each main character. They’re about as generic as they come (though the music remains excellent throughout).

First we have Anges (pronounced ahn-yes), a serious shrine maiden stereotype spouting overwrought dialogue about a crystal of the four elements. Next we have Ringabel, a dashing rogue who’s also a womanizer and amnesiac. Third up is Edea, a headstrong daughter to a major political power. Finally we have Tiz, a simple farm boy from a sleepy village that’s instantly blown to bits along with his brother. Sound familiar? It should, if you’ve played literally any JRPG ever made. This is the type of set-up you’d give to a parody of JRPGs, but Bravely Default plays this premise completely straight for much of the game. You’re four extremely generic protagonists following along a generic plot to re-light four (generic) magic crystals. 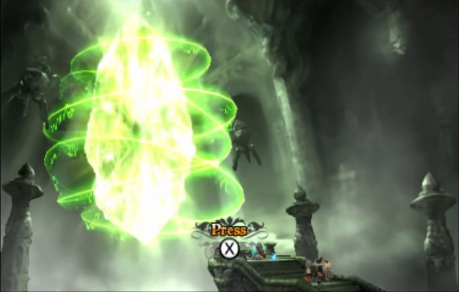 Also, you reawaken the crystals with a quick-time event. Wa-hoa, Bravely Default, save some innovation for the rest of us!
Read more »
Posted by Genericide at 12:07 AM No comments: