So once again we arrive at our regrettably bimonthly update. College continues to limit my time spent with the games of video, so there are really only two games I’ve played in the last couple weeks. The first is more World of Warcraft, and the second is GBA RPG Golden Sun, which I started (and finished) another playthrough of on a whim. What’s that? You say you want to see more of this game I speak of? And you wish to do so by way of an informative and/or humorous internet review by some random blog? Well that just so happens to coincide with what I planned on doing, Suspiciously Informed Theoretical Inquirer. How exactly are you so well informed? Are you theoretically stalking me? 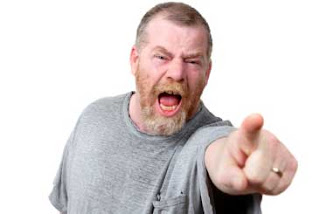 I’ve had it up to here with your theoretical shenanigans! Get the hell out of my theoretical house!


…anyway, Golden Sun was a game released in 2001 by developer Camelot Software, known otherwise for the Shining series of Sega tactical RPGs I’ve never played, and a large number of Mario Golf and Tennis games that I haven’t played either. It was critically acclaimed and a direct sequel, Golden Sun: The Lost Age was released on the GBA two years later in 2003. Afterwards, the series was more or less thought to be done with until 2010’s Golden Sun: Dark Dawn came out for Nintendo DS, focusing the story on ancestors of the original protagonists.

As I briefly mentioned way back in my article on Supposed-to-Lose Fights, I like me some Golden Sun. The games weren’t perfect and aren’t candidates for my favorite games ever or anything, but they were good RPGs that were solid all-around and did some things I really liked. Now even though everyone tries to be objective when reviewing things, I’m aware that you can’t review games in a vacuum. Mainly because there’s no oxygen. So I’m not going to completely ignore the games sequel when talking about it, but I’m going to try and keep the focus of this review on just the original Golden Sun. Don’t worry, I have a desire to see the story resolved after this so I’ll no doubt review The Lost Age in a month or two from now. 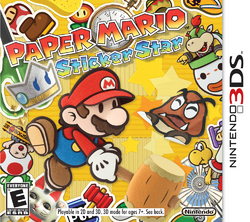 Depending on how long I’m obsessed with this thing, of course.

Golden Sun is a fantasy RPG that takes place in the land of Weyard. Mechanically, it trod the well-worn path of wandering about towns talking to people, wandering about dungeons solving puzzles, wandering about the overworld going to new places, and wandering into random battles in the latter two. The battle system is turn based and would be pretty standard fare but for a few unique twists. Before I get into those, however, I’ll have to explain Psyenergy.

Psyenergy is Golden Sun’s word for magic, essentially. It’s based on the four standard elements of Fire, Water, Earth and Air, which in this game are also referred to by way of the planets Mars, Mercury, Venus and Jupiter. People who have skill with Psyenergy are referred to as Adepts, and are usually attuned to a certain element. You begin the game with Isaac (a Venus Adept) and his friends Garet and Jenna (two unrelated Mars Adepts) in a village full of Adepts (which we later learn is uncommon) named Vale. Over the course of the game’s opening you learn that Vale was protecting something of utmost importance. Everything there was going fine until the fire nation Mars Adepts attacked. 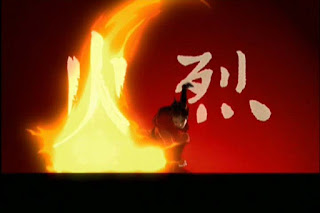 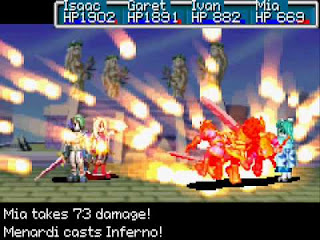 It should be established that this didn’t come out until 4 years after Golden Sun (though the four elements aren’t exactly new material to begin with).

More specifically, two Mars Adepts named Saturos and Menardi visit Vale in an attempt to steal the elemental stars, which can be used on the four elemental lighthouses to unleash the dangerous and volatile power of Alchemy (basically free magic) upon the world. They fail miserably at doing this, and the resulting disaster kills Jenna’s entire family. Cut to 3 years later, and Saturos and Menardi are seen sneaking around again and your party of three along with a scholar named Kraden decide to follow them into the sanctum to prove them as thieves.

Instead you end up opening the way for them and they steal 3 of the 4 elemental stars (you keep one) before having to flee due to the sanctum falling apart without the stars. They reveal that they saved Jenna’s sister Felix 3 years ago, and he’s now working with them for reasons unknown. And as they’re leaving they kidnap Jenna and Kraden, to ensure you’ll follow them and give them the last elemental star. So the rest of the game (more or less) is spent chasing the villains trying to stop them from activating all the mcguffins with the mcguffin crystals.

Keep in mind that this was only discussing the game’s opening, before you even hit the world map. I also skipped a lot of smaller details, some of which become important later on. This game has an interesting world/mythology and some nice twists and turns before it’s done, but I have to say some parts, particularly the introduction, are slower than they need to be. This is particularly frustrating because of the fact that a lot of plot points are left on a cliffhanger at the end, but I’ll come back to that later. 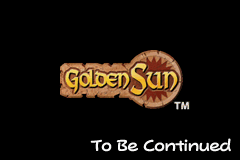 This is the last image you see in the game, which can lead to some frustration.

So practically speaking Psyenergy is just categorizing magic into the four elements, but the way it’s used in the games is where it really shines. In combat, Psyenergy can be used to hit multiple enemies at once, heal allies, raise stats, inflict status ailments, and all the stuff magic usually can. But what Psyenergy your character has, as well as their stats, depend on what class they are. And a characters class is determined by Djinn.

Djinn are collectible elementals, of which there are (in this game) seven of each element. When you equip a character with a Djinn it gives them stat bonuses and, depending on which Djinn they have equipped, can change their class (and therefore stats and Psyenergy). When a character has a Djinn equipped, they can use them to activate special effects. Djinn that have been used are left on standby, where they can be used to perform summons (big flashy attacks, one of which was on my list of top explosions). When summons are used the Djinn have a recovery period before they go back to being equipped.

So not only can you mix and match Djinn to change characters stats and spells, you can also use their special effects and/or use them as ammunition for summons. As complicated as it may seem, you can completely ignore some aspects of the system if you want. I didn’t even realize until the end of the game, but I went this entire playthrough without using a single summon. Instead, I just kept them equipped in good class combinations and defeated my enemies normally. What these three rather dry paragraphs of explanation amount to is a combat system filled to the brim with strategy and particle effects. Lots of particle effects.

In case you couldn’t tell on account of being blinded by particle effects, Golden Sun is a fairly nice looking game for its time. For a 2001 Game Boy Advance game it looks pretty great, but even not taking hardware limitations into account it’s still just a very nice looking game, particularly in terms of summons and Psyenergy. Speaking of, in addition to its pyrotechnic explosions in combat Psyenergy can be used outside of combat as well, and is the main focus of the games many puzzles. A decent portion of the game has a kind of Zelda-esque approach to it with this, utilizing new spells earned to unlock new areas or uncover secrets. Not much more to say about these, but they’re a significant portion of the game and they’re pretty well done, with some being quite clever. 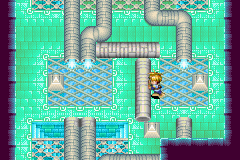 Above we see puzzles that require thought, an endangered gaming species in its natural habitat.

This is the point about 2/3rds of the way through the review where I wax poetic about the games music, because I am nothing if not a predictable hack. Well, apart from all those other things I am, like clever, funny, good at video games, handsome probably, and a lot of other things. So apart from all those things, I’m a predictable hack. Where was I going with this? Oh right, music. Golden Sun has some awesome music. As with most of the game it probably wouldn’t quite reach any best video game music of all-time list, but it’s still really good. That being said, I’ll try to restrain myself and just share a few songs.

This is the games title theme, which also plays during the credits. It may partially be nostalgia, but that beginning part sends a bit of chill down my spine. Excellent stuff, which is why I was sad the sequel had a different opening theme.

This theme plays at the resting place of the elemental stars, as well as some other places. It’s a mystical theme that I feel portrays serenity and wonder well.

Mid-way through the game you face antagonist Saturos alone, to the accompaniment of this awesome music. It’s a shame it only plays for one fight in the game, because it rocks.

Okay, one more. The final boss of the game has a more tense battle theme than any of the previous. Combined with the circumstances you fight him in, it makes the fight climactic even when my characters are overpowered and have no trouble with the fight itself.

So that pretty much sums it up for Golden Sun, but before I go there’s one more thing I want to mention. Well okay, two. Earlier I mentioned that the game ends on a cliffhanger. I looked it up and sure enough, Golden Sun was originally intended to be one huge game that had to be split up into two slightly less huge games, and it shows. There are plenty of subplots and side-stories that are encountered and wrapped up over the course of the game, but the big plot threads don’t get much resolution at all. It’s true that some major events happen over the course of the first game, but all the biggest twists are saved for the sequel. It’s still not a bad story, but essentially what to take away from this is that Golden Sun is best experienced by playing both games, as the story doesn’t do as well stand-alone.

There’s one more thing I want to wedge into this review that I couldn’t fit anywhere else. Golden Sun has a commercial in the US that was weird enough that I remembered it while writing about it. In it, an orchestra slays a gargoyle and a giant chandelier dragon while playing hall of the mountain king. Apart from it being weird, I remembered two things about it. The first is that the music skips in the middle and that bothered me. The second is that it had pretty much nothing at all to do with the game in question. Was still pretty cool though.

So that’s all I have to say about Golden Sun, a pretty good game when all’s said and done. It’s over a decade old so you’re not likely to find any in store anymore, but (as of writing) Amazon has the first game for as low as $13ish and the second for as low as $9ish. If you’re dismayed by the lack of quality turn-based RPGs these days, it might be worth picking up.
Posted by Genericide at 11:36 PM