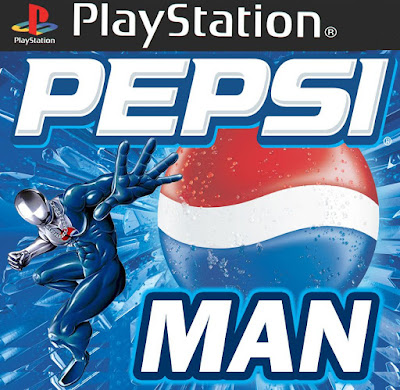 Greetings to all my readers, new and actual. I’m here today to announce an exciting new prospect for all of us* here at Genericide Entertainment! We’re expanding our horizons and shifting paradigms into an incredible new avenue of fresh possibilities and dynamic opportunities. In other words, we’ve gone corporate! That’s right, Genericide Entertainment is now ad-sponsored content! This is sure to be an exciting new era of community connection, exciting innovation, fan-author synergy and exciting new realms of quality products. I’m excited. But before I could embark on this exciting new journey, I needed to get a sponsor in the first place.

This was difficult, since these days long-form text articles are about as lively as your favorite Everquest server. Most of the focus is on YouTube channels, a fact I was happy to exploit until I remembered I don’t have one of those. Unfortunately both Crunchyroll and Audible required I have at least 5 subscribers before sponsoring me. Despite my best efforts, they were not swayed by a potential 5 subscribers. Loot Crate was though. Expect the unboxing video to come up whenever I can figure out how to work my phone’s camera.


In the meantime, I’ve sought more traditional advertising sponsorships for my written content. In the insanely unlikely and irrational event that existing fans are worried about this, they shouldn’t be. I assure you that this transition will be as smooth and seamless as grabbing some great tasting Jack Link’s Beef Jerky from their new EZ-Slide packaging. Now 20% larger and packed with 19% more oxygen! As you can see, these changes will be so miniscule you won’t even notice they’re there! If anything, this blog will only become even more quality than before. Though in the interest of full transparency I’m obligated to inform you that all image captions have been replaced with targeted ads for helpful businesses in your area. 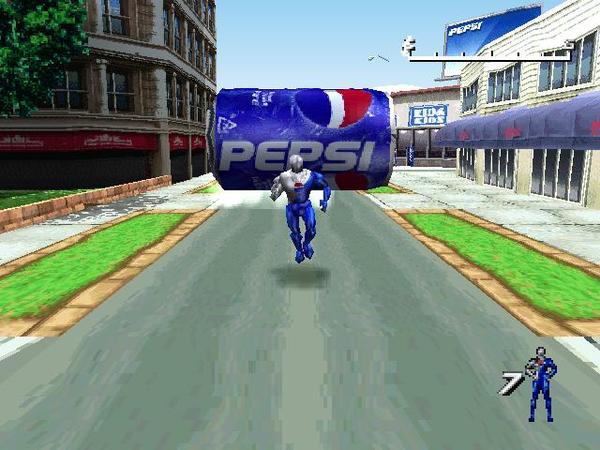 This image is brought to you by Mercer-brand Mattresses. Your princess won’t feel a Prius through these babies! When your mat goes splat don’t tolerate that. Make it a Mercer!

Of course, as much as we all unconditionally love advertising spots, I knew that wouldn’t be enough. Genericide Entertainment is committed to high quality ad-based content, just like Duracell is committed to giving you the longest lasting and well-priced batteries on the market. As a result, I decided to look into enhancing your viewing experience with not just in-article ads but entire articles based around ads. You can thank me later. That’s why today’s game we’ll be reviewing is Pepsiman, or at least the parts of it I can recall from watching some Let’s Plays. What, you thought I’d be playing it myself? Please, these days I’m far too busy having money to bother with that shit. Hm. Can I say “shit” now that I’m sponsored? I’ll just assume yes and ask later*.

*I called up the marketing manager of Pepsi and they said “Wha? Whozzat? Sorry, I’scan’t herr ya. I’mer half to call you black after the cocaine on th’ss table stops screaming at me.” So uh, I think that’s a yes?

Pepsiman was an actual video game that real people made and then sold to other real people for genuine legal currency. I’m as surprised as anyone. Specifically, it was a 1999 Playstation game only released in Japan. It features innovative and genius gameplay mechanics such as moving forward, moving left and right, jumping, not moving backwards, and moving forward quickly. It also features a lot of Pepsi and Pepsi-related imagery. Like, a LOT of it. 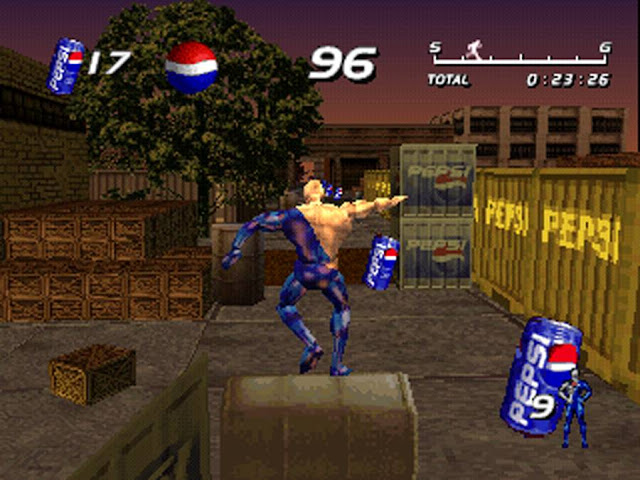 This image is brought to you by Hillbrook Discount Medical Supply and Bike Repair. When your health is at serious risk and you need relief now, you should probably see a real doctor. But like hell you can afford that!

Speaking of graphics, Pepsiman has lots of them, up to and including several. Some such graphics are as follows: Pepsiman logo, opening menu, user interface (lives icon), Pepsiman, red car, trash can, bottomless pit, user interface (health icon), giant Pepsi can, small Pepsi can, billboard with Pepsi can on it, man carrying steel girder, trash can (on side) and skybox. There are a wide variety of images on the screen at any given time and the pictures regularly move. I like how they used color to make some things look different than other things, a fact that would be harder to distinguish if there were no colors. I was going to give the graphics on Pepsiman 12 stars out of 10, but I do have one complaint in the game’s implementation of High Dynamic Range lighting*. Because of that, Pepsiman graphics only score 11 out of 10.

*Namely, that the game does not have High Dynamic Range lighting. 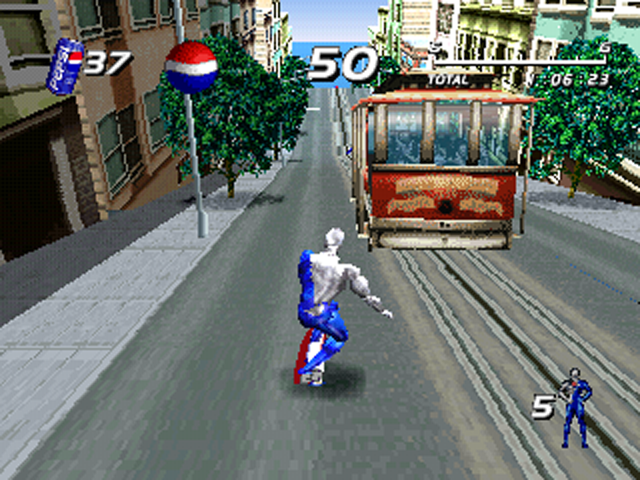 This image is brought to you by Cheese-N-Geezers combination old folks home and pizza parlor. Entrust your aging loved ones to the compassionate care you know they deserve, or just lose them in the ball pit and run away before they catch on.

When you put your official Pepsiman disc in your official Sony Playstation and press the power button, it emits auditory sensations that can technically be considered music. I definitely sincerely enjoy the Pepsiman soundtrack in a way that no corporate overlord could possibly consider sarcastic. An…interesting and, uh, unique property of the music is that it’s all remixes of the same song. It’s absolutely perfect in every way possibly imaginable. The one tiiiiiny complaint I have is that the song they picked is merely a collection of the same four repetitive bass notes over and over again with scratchy dated audio effects leading to the overall impression of an aural drill that pierces right through your skull and into your brain causing untold agony through constant hellish repetition that never ends and never will end for all of eternity not while you still draw breath and so you start bleeding out your ears and lay down in a puddle of your own blood with the fatigued contentment that soon you shall receive your deepest wish and be released from your unending musical torment by slowly drowning in your own cranial fluid. Other than that it’s good. 17 out of 10. 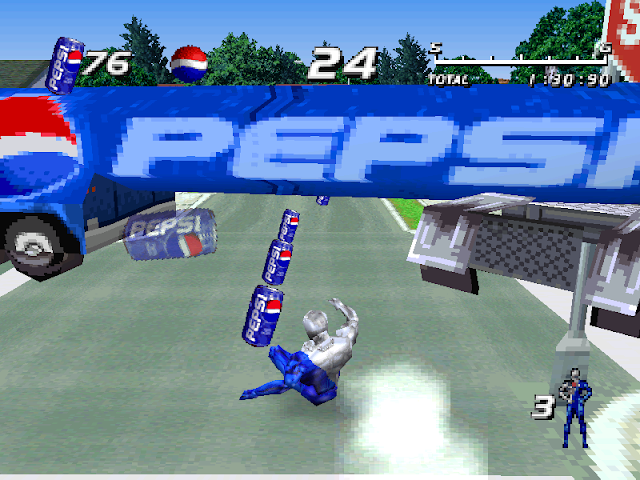 This image is brought to you by Your Local Car Dealership. We gave our nephew a whole afternoon to put linear motion on 3D models from his student version of Maya. You can trust US with tens of thousands of dollars!

The gameplay of Pepsiman is like an infinite runner, except it isn’t infinite. So I guess it’s like a finite runner. Pepsiman constantly runs forward at a speed even faster than the service as your local McDonald’s Restaurant. Which, for the record, is faster than the speed of smiles™. While moving, he must avoid several easy-to-avoid obstacles such as traffic, holes, large cans, people, solid surfaces, small bumps in the road, dust, rogue atoms, etc. At the end of each level the level ends, which is gratifying because the human body can only sustain so much magnificent splendor at one time.

Pepsiman features gameplay that is sometimes not difficult. But it also features gameplay that is sometimes yes difficult. Knowing this, I think it would be 110% accurate to call Pepsiman the Dark Souls of video games. I would also call it like Skyrim with guns, except the guns are Pepsi and it’s not open-world and the dungeons are houses and the dragons are pit traps and the writing is better and the bushes are still bushes and it’s not Skyrim it’s Pepsiman. 4072 out of 10. This image is brought to you by Crazy Jim’s Legitimately Insane Electronics. You want used computer parts?! You want low low prices?! You want someone who has legal documentation of his schizophrenia diagnosis?! Come on down today!!!

Throughout the ages, there have been many individuals whose masterful use of prose have delighted and astounded the world over. Geoffrey Chaucer.  Charles Dickens. Mark Twain. J. R. R. Tolkien. Rob Liefeld. Stephanie Meyer. Whoever writes Megaman Sprite Comic. True visionaries in the field see fit to grace us with their presence every day. In all this hustle and bustle of literary genius, sometimes the greatest works of all fall beneath the cracks. This is the only explanation I can imagine for why Pepsiman, the greatest dramatic storytelling of our age, has not won every award that has or ever will exist.

The narrative of Pepsiman is one of the most compelling examples of Greek tragedy available on the market today.  For generations to come scholars will debate the complex symbolism at play in the scene where Pepsiman stumbles into a shed and comes out with a trash can on his head. The game is wondrously progressive, equally presenting vending machines of all body types and religious backgrounds. That scene in the desert level where the buffalo dislodges a large pile of wood logs for you to run from? It brought me to tears faster than Subway’s new four dollar 9.5-inch sandwich sale. And few things cause a man to weep faster than always fresh ingredients packed between two tasty slices of toasted ciabatta. I dare not go on lest I spoil the frankly incredible act three twist when Ansem assembles all of the Cola Emeralds at the peak of Mt. Gagazet. Just know that this is a truly priceless work of art we have on our hands here.

Also there’s live-action scenes between levels where a gross American stereotype stuffs his face and says things like “Pepsi for TV-Game”. So that’s fun. 7.89 out of 2% stars.

This image is brought to you by Blind Betty’s Tattoo Parlor. When creating art for your own body, you want someone who can make a connection with you on a personal, physical level. Which she’ll have to do, because she’s also deaf.

What more can be said about Pepsiman? Nothing. Nothing at all because I speak the absolutely definitive words on every subject. But if I were to say more, I’d say this: Pepsiman is a game that will touch your heart, and not just due to the eventual palpitations. It will redefine how you look at the world, in the sense that now you’ll be looking at the same world having at one point played Pepsiman. This game will inspire you not just mentally, but physically, emotionally, and if you’re not careful sexually. Never have I seen a more awe-inspiring and monumental accomplishment in the realm of a man walking back and forth to avoid obstacles and collect cans.

I have never once tasted Pepsi.
Posted by Genericide at 4:42 PM