Recently, through the magic of the internet I came across a playable version of Wario Land for the Game Boy. This harkened me back to the days of my youth, where Wario Land 2 was one of the first games I ever owned. However, the first thing I discovered is that Wario Land 2 is very different from the original in a few key ways.

For the uninitiated, Wario was a character originally invented as the antagonist of Super Mario Land 2, the sequel to the titular plumber’s handheld debut. Shortly thereafter, a Game Boy game by the name of Wario Land was created, in which you played Mario’s greedy counterpart instead. However, the original Wario Land featured a Wario who hadn’t fully come into his own style. The game itself is subtitled “Super Mario Land 3” on the title screen, and the influence shows. Wario’s complex and intricate character makeup has always essentially been “Mario but a jerk”, and the gameplay of Wario Land shows a similar amount of change. Wario goes from left to right, hits blocks from underneath to grabs power-ups and even grows smaller when hit. There are two main differences from how Wario handles in terms of gameplay. The first is that Wario can use a dash attack with the B button to destroy enemies. Jumping on them, rather than destroying them, flips them on their backs, at which point Wario can pick them up and throw them.

However, as evidenced by the subtitle Wario Land is very much a game caught dragged down by old ideas. The new moves in Wario’s arsenal were interesting but not as integral to the experience. Similarly, the appearance of Wario himself was part way between that iconic design he’s known for today and that…interesting appearance he had in Super Mario Land 2. 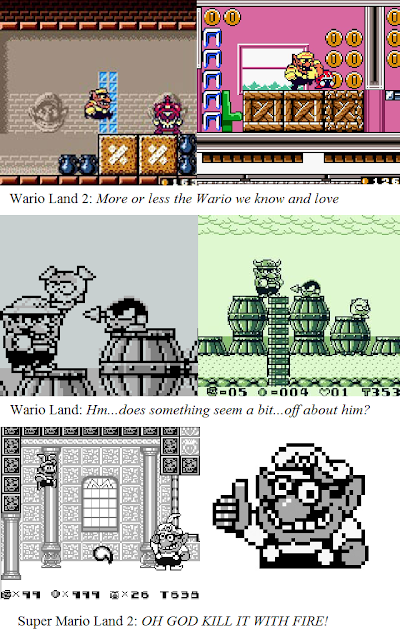 However, I only mention Wario Land’s awkward position to expound on how much better its successor was. It’s always nice to go back to a beloved childhood memory and discover it holds up in the present day, and video games tend to experience the most returns in this regard, as gameplay has somewhat of a universal appeal. Wario Land 2 was as good as I remembered it, as it had layers of depth mini-me wasn’t even aware of.

The first and most important thing to mention about Wario Land 2 is that Wario is immortal, a fact he boasts of in the very instruction manual. Wario cannot die, and the entire game is designed around this fact, creating something that was more than a simple Mario knock-off and evolved into a unique puzzle platformer all on its own. Instead of dying when being hit, one of two things happens to Wario. The first is that he simply loses some coins, assuming he has some. I’ll get into what coins are used for later. The other thing that may happen when Wario is hit is he may be transformed.

When Wario is stung by bees his face bloats causing him to forcibly float upwards until he hits the ceiling. When Wario is hit by a hammer he briefly becomes a constantly jumping spring. A plethora of painful power-ups exist in the game through these means, from flattening to fire to zombification and more; and though one or two are just annoyances most are used to solve puzzles in a unique matter I don’t think any other game has tried except Sphinx and the Cursed Mummy years later, which is another game people clearly can’t stop talking about. 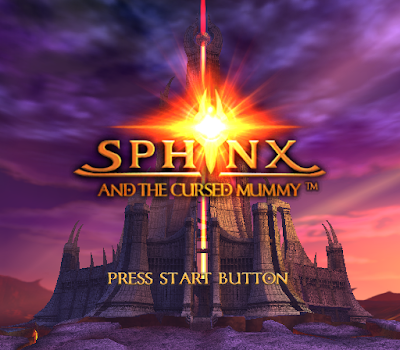 The aforementioned invincibility and power-up/downs would be enough to make Wario Land 2 a unique platformer in its own right, but the game also had a couple other tricks up its (lack of) sleeves. Wario’s move set remained more or less unchanged from his first outing, but his charge was smoother, his jump and movement physics were tweaked, and his throw could now be charged or aimed upwards. This all led to a game that was generally more thoughtful and puzzle oriented than your typical handheld platformer. But there was one more feature that worked in conjuncture with these abilities that made the game enjoyable.

Remember how earlier I mentioned coins? In Wario Land, unlike in the Mario games coins aren’t used to gain extra lives. How could they when Wario has no lives to speak of? Instead, coins are used to fund the games 2 mini-games. The first of these two is hidden somewhere inside every stage, and consists of matching a picture of an enemy to one of eight quickly revealed on screen. Paying 200 coins will activate Easy mode, giving you a good long eyeful of the enemies so you can look through them at your leisure. Paying 100 coins will activate Normal mode, whereupon the pictures are shown fairly quickly but not so fast that you can’t follow, so that it may be difficult but with effort you can usually win. Paying 50 coins will activate Hard mode wherein I’m fairly certain that the pictures are actually revealed for negative seconds, in which case the pictures are somehow actually made blanker. One has to admire the designer’s dedication to breaking the foundations of time all for the purposes of said mini-game. These mini-games reward treasures. The second mini-game take place at the end of every stage and involves a 3x3 grid of pixels representing a number 0 through 9, where the player spends 50 coins per panel until they are ready to guess which number is being shown. These second mini-games reward pieces of a map.

Wario Land 2 has a total of 50 stages, but those stages are not strictly linear. You see, after the first time you beat the game you’re given a map of all the stages and from then on allowed to choose any you wish to play that you’ve unlocked. Wario Land 2 has several branching paths throughout the game that you can discover through hidden exits throughout the game. These lead to entire worlds, with their own bosses and endings that the player wouldn’t know about the first time they play through the game. And only when you have beaten every stage and collected the treasure and map piece for each one do you unlock the final final stage. 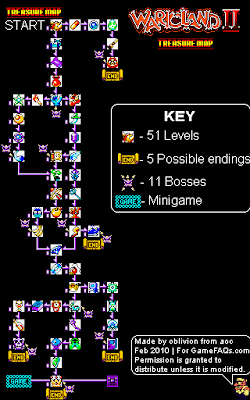 All this leads to a game which manages to be entertaining and interesting without being overly frustrating. For you see you can never really lose at the game. Bosses simply expel you from the arena when you fail, and can be reattempted with no penalty other than a short walk back. And even if you miss both treasures in a stage you can always earn some coins for later attempts. The stages may be easy to complete on their own but are positively littered with hidden rooms accessible via hidden doors, breakable walls and floors, and using your “powers” to your advantage.

In addition, the game is just competently made in general. The music, though not absolutely amazing, is a decent, standard chiptune affair that even succeeds in producing some fairly catchy jingles. And because I never pass up a good chiptune, allow me to share a couple:

The game’s title theme, which though short is kind of catchy and comes up in many of the games other tunes.

This song plays during any one of the game’s final boss fights. Short but it has a certain charm.

The game is obviously limited visually by the fact that it’s on a Game Boy, particularly my version which is black and white as opposed to the pretty color version you see in these screens. However, the game has plenty of personality conveyed in its visuals and character design, like an amusing boss fight in which an inner city bunny rabbit challenges you to a basketball match. 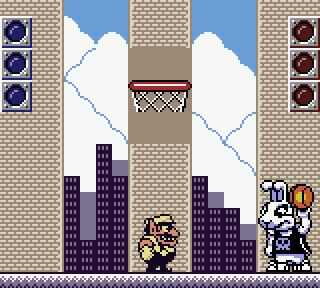 However, at this point I’ve probably made the game out to be some manner of lost classic that should be hunted down like the holy grail of handhold platformers, so perhaps I should add a few grains of salt to this sumptuous review.

The game can’t kill you, and thus can’t force you into my least favorite gameplay mechanic, that of tossing you back to the start of the game if you fail. However, this doesn’t mean that it’s completely devoid of frustration. The lack of death mean that the game is encouraged to throw some tricky to avoid challenges at you, and some of the boss fights in particular will no doubt irritate in this regard. The games love of secret doors may often lead to wonderful discoveries, but the fact that just about any given wall or floor could potentially be broken will undoubtedly leave you throwing your hands up in annoyance for those hidden areas that you’re given no clues for whatsoever, and you’ll either flee to a walkthrough like me or spend a very long time checking every available surface. Another annoyance is that during normal gameplay, the game does that bothersome screen transition where vertical blocks are done all at once, in a manner reminiscent of, say, the original Legend of Zelda. Though the game usually avoids largely vertical segments this can sometimes lead to the feeling that there was no discernible way for you to tell when an enemy blindsides you from above or below.
But those complaints being said, I still quite enjoyed my time with the game and theorize that many of you may as well. If you like platformers, particularly of the puzzley variety, and have an old Gameboy or some, ahem, other means of accessing the game, I heartily encourage you to dive in and give Wario Land 2 a try. It’s a unique little game that, though never outright brilliant, is certainly worth your time. Plus, what other game can you only advance by setting your butt on fire?
Posted by Genericide at 4:48 PM