Last time we saw Shush’Ogar, he came to the coast city of Anvil, wandered into the mage’s guild, secured a membership, secured all their stuff, secured all their riches by selling their stuff back to them, then secured a job to defeat a rogue mage. The task was quickly completed, securing him a recommendation. We rejoin our protagonist outside the guild hall...

Shush wasn’t sure wot ting he was gonna do next. Shush knew dat he needed to visit a buncha places to get more better mage-y stuff, but dose other places were far away. Plus, Shush felt like dere was another ting he was s’posed to do dat he was forgettin. Shush were walkin down de street tryin to figure out wot dat was when he overheard some people talkin.

“Yeah, it sounds like Maelona is getting pretty desperate about it.”

“Well I would be too, if I were her. ‘Course I’d probably try and get money out of a divorce settlement rather than paying strangers from my own pocket.”

Shush wasn’t always de best at listenin, but he was real gud at hearin about people payin him. Shush walked up to de people talkin.

“Did you say somethin about people payin strangers for stuff?” Shush said.

“Oh, um, hello sir. Yes, the couple down the street” de man pointed as he talked “was having some trouble with the local gang. You know...the all-female one? They’re willing to pay-“

“Dat’s all Shush needed to hear.”


Shush walked down de street an banged on de door dat de man had pointed at. After a bit of bangin Shush heard someone on de other side.

“Yes yes ALRIGHT, by the Nine what could be so urgent that you-“. De guy stopped talkin when he opened de door an saw Shush. He was a guy wit dark skin an fancy red clothes. Shush waved an his clanky clothes made a buncha noise. 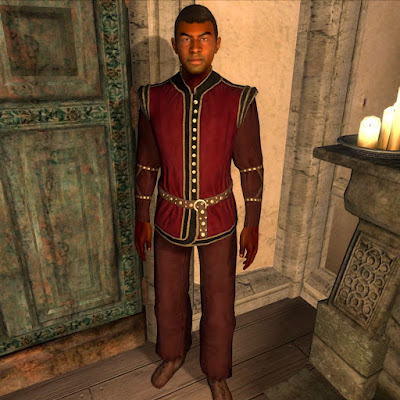 Pictured: A man wishing he answered the door in full plate.

“Shush are here because dere was someone who would meybe pay Shush for a job?”

De man’s shoulders went all saggy. “Oh, you’re here for that.” He sighed. “You’ll want to talk to my wife Maelona, she’s round the corner and up the stairs.”

Shush stepped by de man an walked up de stairs. Dere was a woman up here who also had dark skin, an who jumped a bit when Shush walked up.

“Hey, Shush heard dat you were de person who would give him money for doin somethin wit a gang?”

“I see. Yes, I’m willing to pay an enterprising individual. How would you like to get my husband, Gogan, out of hot water?”

Shush blinked an looked over de railing to de first floor. De man from before was dere, an he glanced up at de noise. Shush pulled his head back.

“Dat guy? Don’t worry, dere’s no water anywhere nearby him. Also it’s been pretty cool outside so-“

“No you misunderstand me. I mean do you want to help us with our problem?”

“Oh, why didn’t you say so? Shush is super ready for dat, if you is gonna give Shush money.”

“Alright, here’s what’s going on. My idiotic husband fell for the scheme of a local gang. This is a gang of all women, who prey on local men by luring them to a remote location, where they rob them blind. The guard haven’t stepped in because the men are too embarrassed to say anything. Unfortunately, I don’t have the option of ignoring this.”

De lady peeked over the railing an glared at her husband. “You see, when my DEAR husband Gogan was with those women, they took something important from him. A family heirloom, a ring passed down for generations. I need it back, so I’m willing to pay you to get it.”

“Er...we don’t need to skip straight to murder...I just want my ring back. Look, I suggest you go hang out at the bar where they’ve been known to frequent, The Flowing Bowl. See if you can get them to take you to their hideout, then you can retrieve what they’ve stolen.”

So den Shush headed out to de docks where de bar place was. He went inside an sat down on one of de chairs. De guy behind de counter asked if Shush needed anything, but Shush shook his head an just sat dere for a bit. After a few seconds two girls wit blonde an black hair came over an started talkin to Shush.

No I am not friggin’ exaggerating. They really do just have these NPCs make a beeline for you. I mean I understand that they don’t want you to wait long, but an intermediary step would’ve been nice. I’m surprised this gang hasn’t been caught when they immediately try to seduce any male who walks in the door. 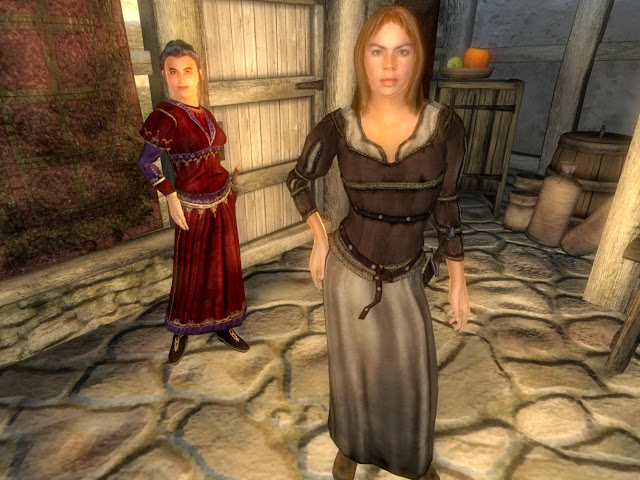 And here two ““seductresses”” are, in the flesh. I could use more quotes around that, good lord the Oblivion faces are terrible.

“I haven’t seen you here before” said de blonde girl. “Aww, and you’re all alone too. How sad. Well, if you’re up to it we can solve that little problem. Me and Faustina here are lonely too, and we have a cozy little farmhouse not far from here where we could...get to know each other better. Here, I’ll mark it down on your map. Meet us there around 11 tonight, I’ll be looking forward to it.”

“Okay den, so I should come to dis place at 11 so we can have a party or somethin?”

“Do I really need to spell it out for you?”

“Nah, Shush never learned dat spellin stuff. Shush’s teacher back in Orsinium said dat Shush had a brain problems or somethin, so instead when Shush needs to read somethin he has a list of words to match up wit other ones.”

De lady’s eyes glazed over a bit. “Right...just come to the farmhouse, okay?”

Den de two ladies left. Shush didn’t know what to do next so he left town an headed for de farmhouse. After Shush got dere he looked around nearby for wolves to smash an flowers to pick for a few hours. When it started gettin pretty dark out Shush headed back to de farmhouse an opened de door. De lady wit black hair was inside, near a big fancy bed. 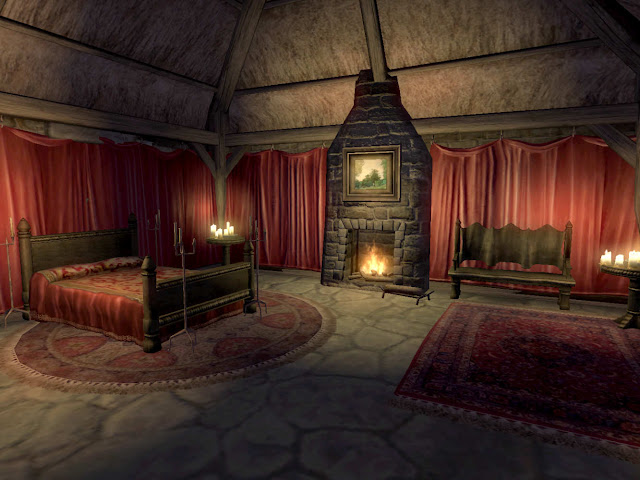 “And here we have our violent robbery and murder suite. What’s that? The name? Oh it’s probably a metaphor or something.”

“I see you took us up on our offer. Good. Signy will be along shortly, but I’m sure we can find something to do while we wait. Why don’t you get out of those clothes?”

“Shush looked down at his clanky clothes. “Nah, Shush likes wearin dis. It’s heavy but he’s gettin used to it by wearin it all de time. Hey, do you know where Shush can find a ring? Shush were supposed to find a ring here.”

“What? Ring? Damn, you’re working for the city guard, aren’t you? I didn’t think they’d be stupid enough to send someone alone, but I should’ve expected this after the fake ring. Girls, we’ve got someone who doesn’t want to cooperate!”

Den some girls came out de door to de basement an dey an de black haired girl started tryin to stab Shush. It tickled. Shush shrugged, he wasn’t gonna do any of de smashin but if dey insist. After a few quick bashes in de head, all a dem fell down an Shush took dere shiny stuff. Den two guards came in de door. Dey looked a lot like de dark skinned guys from before.

“Well, I suppose that works” said de woman. “Surprised to see me? We were actually members of the guard this whole time, working undercover. It’s a shame that this had to end in violence, but one way or another the gang is finished. All known gang members are accounted for. We’ll clean up the mess here. Here’s your reward, and thanks.” 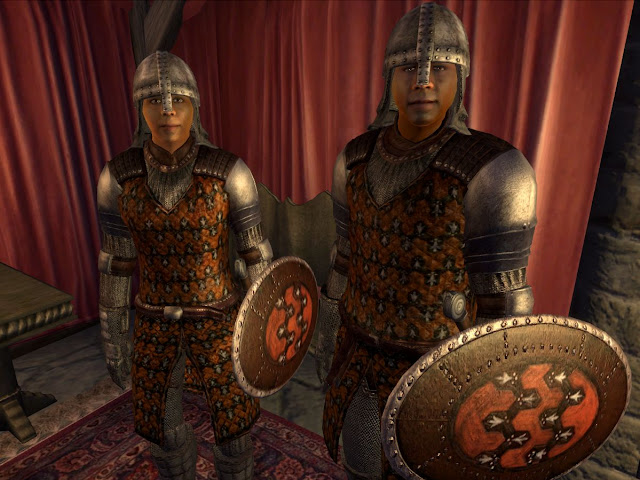 “We were gonna come in when the sounds of violent murder started, but figured to wait a couple minutes just to be sure.”

Den she gave Shush a bit of gold. It wasn’t much compared to what Shush had, but de shiny stuff he got from de girls seemed nice. So Shush left an headed back to town.

In case you’re wondering, no, you can’t agree to sleep with the woman. In fact, the quest doesn’t offer any choices whatsoever. If you’re female, there are actually some differences in dialogue, as the gang offers you a position instead of a roll in the hay. However, either way you can’t accept. You can’t even prevent the gang from committing assisted suicide by way of attacking a heavily armed adventurer. Like so much of Oblivion, this quest is a neat idea with a lot to be desired in terms of execution.

That’s all for this week! If this entry seems a bit short compared to my previous massive missives it’s because originally, it was. But it grew so large that I decided to split it into two posts. Shush’s Anvil adventures aren’t quite over yet. Join us next week, for a hauntingly interesting quest...
Posted by Genericide at 8:31 PM