Last we left off on Oblivion Adventures, stalwart spirit slayer Shush’Ogar invested in some bad real estate. After purging poltergeists from his property, he slipped off to sleep. As for what he encountered next...

Shush yawned an rubbed his face. Shush guessed dat he had dozed off for a bit dere. Shush checked around him to make sure everyting was de same as before. Dere was a table of people drinkin in fronta Shush, an he was sittin on a throne made of rainbow colored skulls. Dey were all sittin on top of one a dose flat boats in de river, which was all red an bloody. Sometimes bits of crab shells bobbed in de water as dey passed.


“Enjoying the celebration, lord Shush?” said one of de people next to him. Shush squinted but couldn’t focus on any face parts de guy had for some reason. Shush rubbed his eyes.

“Why the grand mudcrab extermination, of course! It was your first act as supreme lord-king of all Mundus. I’m not surprised you’re tired, given that you killed every single one yourself. We were all very impressed when you took down the mighty mudcrab king. We knew you were strong, but none of us expected you were also the greatest mage and sneak-master in all the land!” 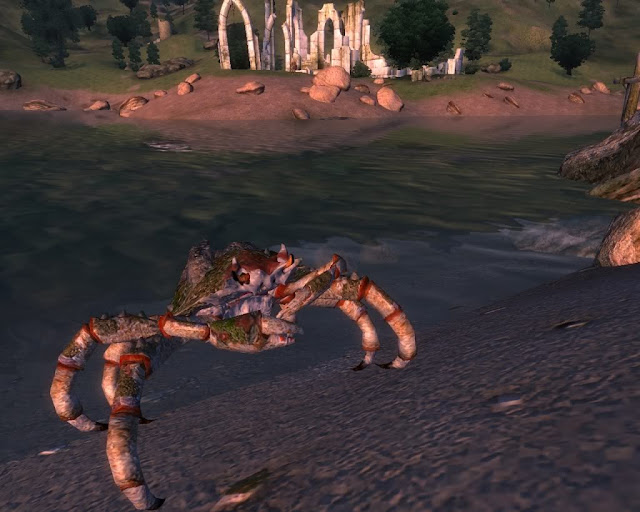 “I heard they tried to run and hide, but you tracked them by listening to music or something?”

“Oh, yeah. Dat sounds like a ting dat Shush would do.”

“We were just finishing our celebratory feast through the river of dead mudcrabs. Care for another bite of crab meat? Soon there won’t be any left, with them being extinct and all!”

Shush waved away de bloody leg de guy was holdin. “Nah, dat’s okey. So after de eatin mudcrab an stuff, where are we goin?”

“Why, back to your really big castle of course! We were going to have a party in celebration of you being the greatest guy ever! There will be dancing and fancy lights and everyone will take turns talking about how great you are. Not to mention that you’ll have access to all the food and sex you could possibly want!”

“I believe it’s a rare type of meat, sire. Its best eaten in thin slices, so we’re preparing appropriately. The chefs back at your castle are vigorously pounding as we speak.”

Shush nodded an was about to say somethin else, but den one of de people yelled out an pointed at a big rock de boat was headin towards. Shush squinted at it an called to de guy he was talkin to. 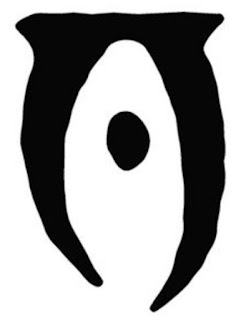 Whatever it is, de word looks real short.

“It doesn’t say anything sire, it just appears to be the symbol of Oblivion, carved into the rock and glowing red. A very ominous symbol sire, do you think it’s trying to tell you something?”

“No my king, what I meant was that sometimes mystical signs are given from the gods to tell people what to do. They’re especially common in dreams...”

Shush felt like de guy was expectin someting from him. “Well, dat’s cool.” Shush sat in silence for a minute. “So when are we gettin to de castle?”

Den dere was a big boomin noise off in de distance. Way out past de river Shush saw a big buncha smoke floatin up past de forest.

“By the nine, that’s coming from Kvatch!” said de guy next to Shush. “My lord, the city of Kvatch could be in terrible danger! Should we change course, sire?”

Shush thought for a sec while he picked a booger from his nose. “Why?”

“Well like I said, Kvatch is in danger! This is a clear sign. A sign that we should, you know...” De guy stopped talkin an waggled his eyebrows. Shush stared. “... that we should probably do something about it?”

“Shush didn’t cause de big boom. Shush are thinkin he wants to go to dat cool party instead an-“

Just den, dere was a rumblin in de water. A real big an thick stone wall shot up from de river an into de sky. It was a whole buncha lots higher den Shush, an it had big glowy symbols all over it. De boat clunked as it got stopped by it.

De guy was lookin down an had a hand over his eyes. “It says, “SHUSH, GO TO KVATCH ALREADY”, sire.” 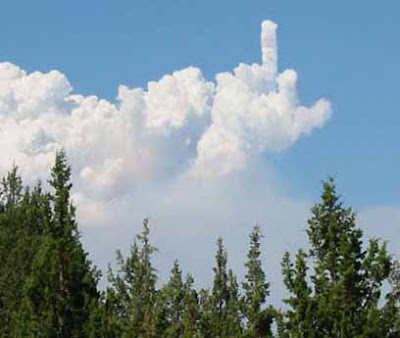 If only somebody would give Shush some kinda sign of wot dat dream meant.

Just as Shush was walkin outside his big fancy house, someone came out of de mage’s guild. It was dat elf chick wot Shush did a job for earlier, except in her pajamas. She saw Shush an started walkin fast towards him.

“You there, associate!” she said as she was walkin. Shush waved to her.

“I was told you cleared the curse on the old manor, great to hear. I was there when we dealt with Benirus the first time, glad to know the vile old man is gone for good. But that’s not what I need to talk to you about. What I need to tell you is that I just had a VERY vivid dream.”

“Oh, so did Shush! It was a gud dream, wit lotsa drinkin an fun stuff. But den some weird tings happened an Shush doesn’t know what it meant.”

De elf blinked in surprise. “Well that can’t be a coincidence! However, unlike yours, my dream was very clear. It told me you need to go to Kvatch RIGHT away.”

“Huh. Shush didn’t thinka dat. But why should Shush go?”

“Why...? It doesn’t matter. You don’t refuse a message from the gods! My dreams were extremely blunt about this.” She shuddered. “Lots of...melting flesh. You have to go!”

De elf lady started at Shush for a second. Den she sighed, an reached for de bag at her belt.

It was a while later, an Shush was walkin down de road to Kvatch in a pretty gud mood. Shush didn’t know why it was so important dat he went to dis Kvatch place, but de 50 extra shiny gold coins in his bag convinced him it was a pretty nice idea. Besides, wot was de worst dat could happen dere? 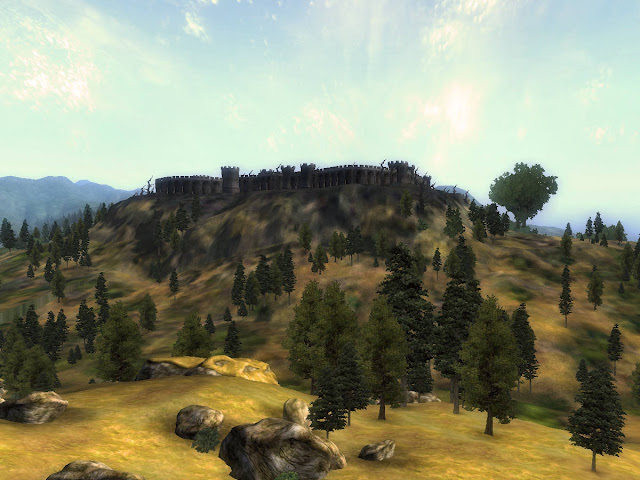 It looked like a real nice day up near Kvatch too. But for some reason dey painted de grass all dark.

After about three dead bandits worth of walkin, Shush was off by de side of de road pickin flowers when he heard a guy screamin. When Shush looked up he saw a twitchy elf wit messy hair runnin towards him.

“Come on! Run while there’s still time! The Guard still holds the road, but it’s only a matter of time before they’re overwhelmed!”

“Are you from Kvatch? Shush were just going dere.”

De elf ran up to Shush, grabbed him by de shoulders an started tryin to shake him.

“No you fool, listen to me! Kvatch is a smoking ruin! Fire and blood and nightmares everywhere, gods above, EVERYWHERE! We’re ALL that’s LEFT, do you understand me? Everyone else is dead! DEAD!”

After a minute de elf stood up an bushed all de dirt off his vest. He coughed. Den he glanced at Shush wit his head down all awkward an walked away.

It’s worth noting that I’m barely exaggerating the dialogue with this elf. I kind of like it, in a campy way, but it’s more silly than threatening. It seems that 90% of the crazy people in this game are high elves, too. That’s probably a byproduct of the limited voice acting. For those who don’t know, this game tries to create a vast country full of ten different races of both genders...with nine voice actors. Technically there are 15, but three of them only voice specific characters from the main storyline, and three only voice monsters and miscellaneous bits.

You can’t really fault the voice actors for this. You would need over double the amount of them to have just a single unique actor for each race and gender. But even though it isn’t their fault, the problem does break your immersion every now and then. For example, you might stop speaking to someone and immediately start talking to their identical twin, voice-wise. Sometimes you’ll even hear wandering citizens having casual conversations with themselves in the background, like you’re listening to your DM playing both sides. 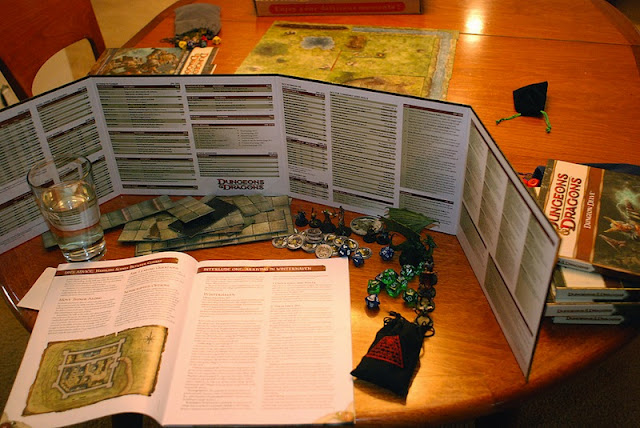 “And then the one villager says ‘I saw a mudcrab the other day’. Then the other one is all ‘Filthy creatures’. And then the first one is like ‘Goodbye’.”
“...Dave you are TERRIBLE at this.”

Perhaps the worst example is rumors. See you can only ask people about specific topics related to them, but the one thing you can ask everyone about is rumors. Say you’re talking to someone with a unique voice, like a creaky old beggar. If you ask them about rumors, they’ll pull up a generic line of dialogue about nearby points of interest. They’ll also do a terrific impression of a completely different characters voice. I’m sure such a large amount of voice acting is expensive, but it’s a good thing Bethesda sprang for it in later games. It was silly.

So Shush went down de road an passed by a tiny camp of people in tents. When Shush started walkin uphill towards de city he heard some people shoutin about not goin dat way, but Shush didn’t listen. Shush knew he was gud enough at smashin an sneakin dat whatever was up dere couldn’t stop him. As Shush got closer to de city, de sky got all red an stormy for some reason. Dat was new. Dey didn’t have red clouds back in Orsinium, must be a Cyrodil ting. As Shush finally got over de top of de hill he saw somethin even more stranger. 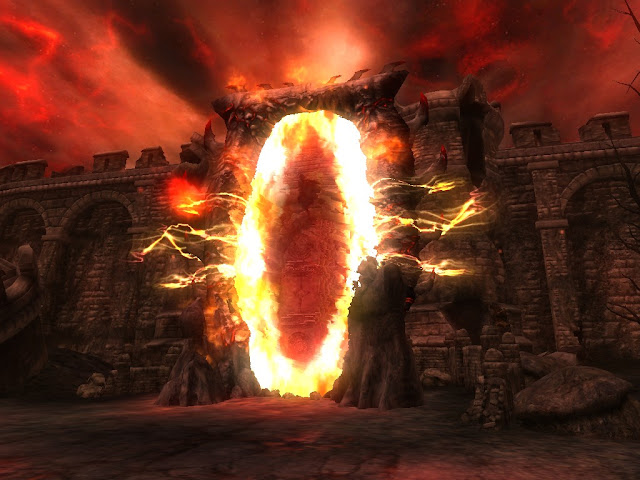 Shush are thinkin dat might not be a Cyrodil ting.

Dere were some guards behind some pointy sticks at de top of de hill, an one of em yelled at Shush as he got close.

“Stand back, civilian! This is no place for you.”

“Don’t tell Shush what to do, he aren’t no civilman.”

“Hm, you’re right, I don’t recognize you. I’m captain Savlian Matius, what are you doing here?”

“Shush were told dat he had to come to de city of Cab-batch for somethin.”

“Well I’m afraid whatever it is, you’re too late. We lost the damned city. Everything happened too fast, we were overrun by demons from that wretched gate and most of Kvatch has been burned down. There are still some people trapped inside, holed up in the chapel, but we’d have to get through the Oblivion gate to enter. We can’t spare the men for that. Daedra keep pouring out every now and then, and they’d get to the civilians at the camp if we left.”

Savvy-lion looked down at de ground, his face all serious an grim. “It’s not looking good for the survivors inside. There are a couple of guards with them but they can’t last forever. The priests Oleta and Martin might be able to help, but-“

“Hang on” said Shush. Somethin was buggin him. “Wot was dat last guy?”

“Brother Martin? What about him, do you know him?”

Oooh Shush did a bad ting.
Posted by Genericide at 11:57 AM