Little notice before we start. I played an indie game this week called Undertale. I heard of its release over a month ago, but was too busy to play it. From what I heard, I expected it to be some fantastic triumph of a game that I would remember for years to come. It was. The combat is fun, the writing is fantastic, the music is excellent, and it has its own style not quite like anything else. I don’t yet have enough to say on it to fill an article, so I’m saying here: Undertale is an amazing game and I sincerely recommend people play it. We now return to your regularly scheduled rushed holiday special.

“Well it looks like we’re stuck here for a while” said Martin glumly, sittin down on de curb next to Shush.

It were just after Shush an Martin left de inn at Skin-guard. When Shush had gone to da gate de guards said dey couldn’t pass. A wanderin herd a cows was blockin de gate an dey needed some time to shoo dem away. Since Martin seemed a bit grumpy bout dat, Shush tried to cheer de guy up.

“And what would that be?”

“We can tell each other scurry stories ta pass de time!”

“Here’s your story: Once upon a time a priest devoted his life to doing the work of Akatosh. Then a horde of demons burned down his home and murdered most of the people inside it, which was actually all his fault for living there in the first place.  The end.”

Shush clapped his clanky gloves together quick and loud for a sec. “Dat was a gud one, Marty! Shush hadn’t ever heard it before an he didn’t really get it but you tried so you’s get an E for effort!”

Martin just stared at Shush for a while. Den he started to speak slowly: “You...really mean that, don’t you? You aren’t mocking me?”

Martin musta had to itch real bad cause den he put his face in his hands an rubbed it all over. Den he did a big ol sigh an looked back up at Shush.

“Dis is a tale of a real spooky ting dat was scury an bad an makes people real scurred. Dere was once dis super great orc guy, an his name was like...it were like Shush but different soundin. Uh...dis is a story wots about Shash de sneaky orc mage smasher guy. Cept its real spooky. Did Shush say dat already? Alright so...dere was dis orc guy.” 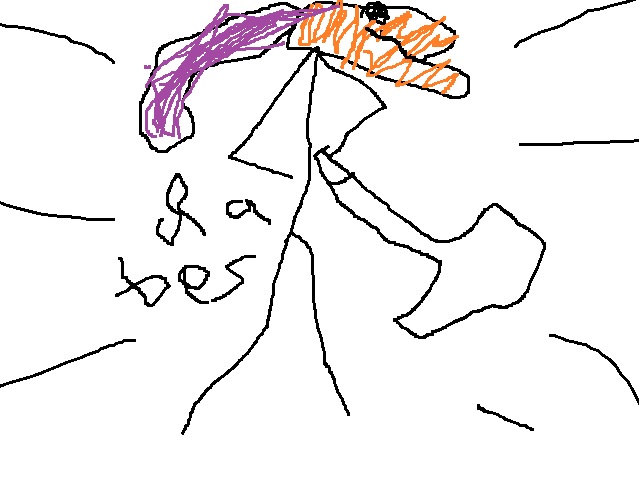 “Dis orc-y guy named Shash were de best at all of de tings dere was to be de bestest at. He were great at smashin stuff wit a big hammer, an castin magerly spells, an sneakin all over da place an stuff. All de peoples liked de guy an every day were great for him cause he were so cool. But den, one day, a spooky scurry ting dat made people real scurred happened to Shash!” 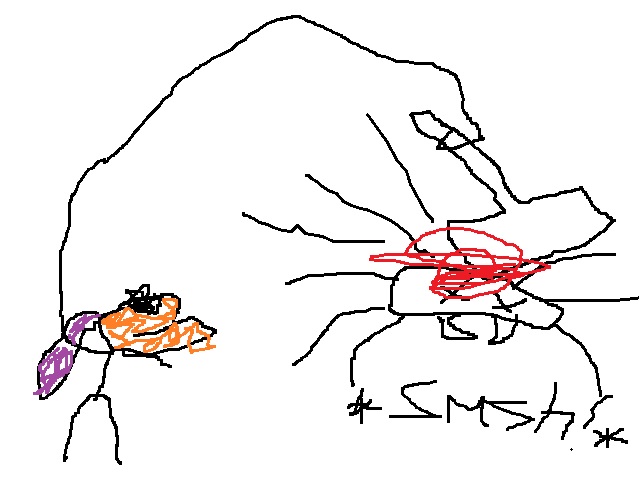 “Shash were out smashin mudcrabs like wot he usually did, on account of mudcrabs bein stupid dumb jerkfaces dat everybody should hate. It were goin real well an a buncha mudcrabs were dead an it was all happy an stuff. But it couldn’t be happy for long, because for de reason dat dis were a scurry story were bad stuff happens. So den dere was dis time when Shash had just done smashed a mudcrab real gud when all of a suddenly dere was a real scurry sound dat was spooky! It were comin from de water an den Shash looked his head over to de water an dere was a ting in de water an it were a ting dat were comin out of de water!” 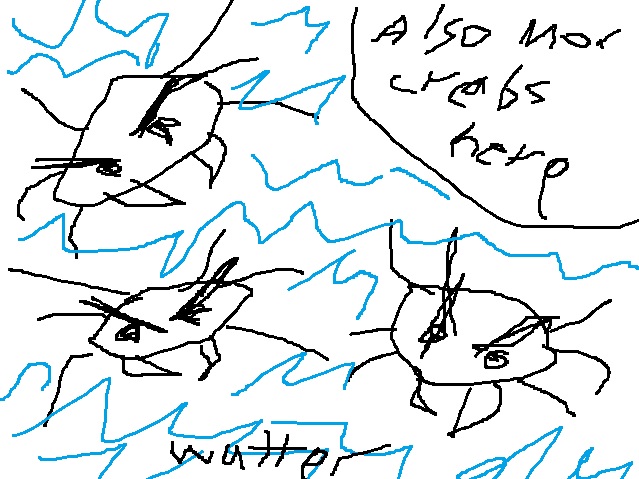 “Dere were a lotta lotta lotta real lotta mudcrabs comin out of de water from everyplace! Dey were real angry mudcrabs cause of because dey had gotten dere other mucrabs killed by de cool guy dat was Shash. De evil mudcrabs were angry an mad so dey gots all de evil mudcrabs together all at once in de same place even. Den dey came out of de water to destroy de super awesome orc man Shash an it were scurry cause even doe Shash were de bestest guy dat smashed a buncha mudcrabs every day dere were a whole buncha big number of mudcrabs an dey were after Shash! Also de mudcrabs were super big an strong an dey could shoot fire outta dere eyes an faces an it went all like ‘BRWOOOOSH!’ like dis!”

Shush made blowy noises wit his lips an waved his arms all around so Martin understood how de fire went brwoosh like. 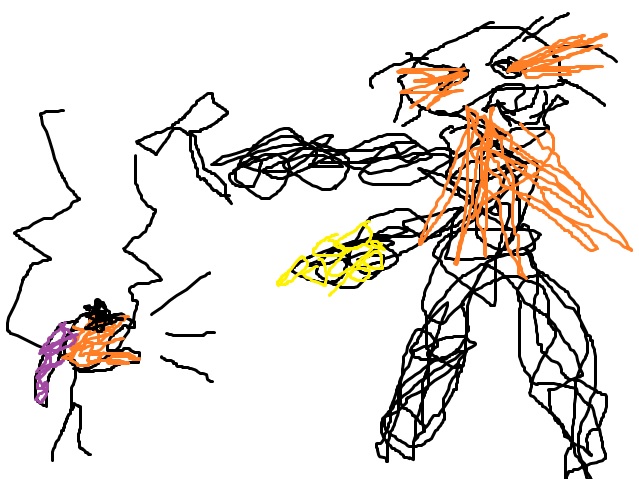 “Den de mudcrabs all got together into a big person made outta mudcrabs an it were real big an scurry an also breathed fire all like “BRWOOSH”. De big scurry mudcrab guy went an he took de nice hammer dat Shash had an wouldn’t give it back an also he took all his shiny gold coins! Shash were real sad an angry only he couldn’t do anything on account of because de giant mudcrab man was so big an also he couldn’t reach his tall arms! It was really scurry an not nice an Shash didn’t like it at all! So den de ting dat happened next was-“

“What are you two doing just sitting out in the street so late at night? Seems suspicious if you ask me...don’t think you can hide it! I know more than I appear, and I-“

“Ohoho, you’d love that, wouldn’t you?! Well you’re out of luck! I’m not revealing my identity to you! I see what’s going on here! So if you suspicious strangers are done trying to uncover my secrets, I’ll ask again. What are you doing here?!”

“Ha! A likely story! I’d think you would have a better excuse than that, but it’s clear to me that-“

“Glarthir” said one of de guards by the door. “They’re not lying. They’ve been telling stories waiting for some cows to stop blocking the gate.”

“Why don’t you take a turn” said Shush. “Ya gots any scurry stories to tell?”

“Scary stories? Yes, I suppose I have some. Stories of a poor, defenseless wood elf, hounded everywhere he goes by shadowy agents of secretive cabals. A noble, innocent man constantly chased by vile conspirators who corrupt the hearts and minds of all he meets. And so he lives forever in fear, keeping to the shadows. The things he knows jeopardize him, so he has no choice but to remain silent. But not for long! The day will soon come when he moves free from the eyes of hidden observers, when he liberates himself from his pursuers! They can’t hide from him forever! He knows what they’re up to! DO YOU HEAR ME TOUTIUS SEXTIUS?! I’M ON TO YOU! I SEE THROUGH YOUR RUSE AND-“

A nearby guard walked up an put a hand on Glar-fears shoulder. “Sorry citizen, I’m going to go have a chat with Glarthir for a minute.” 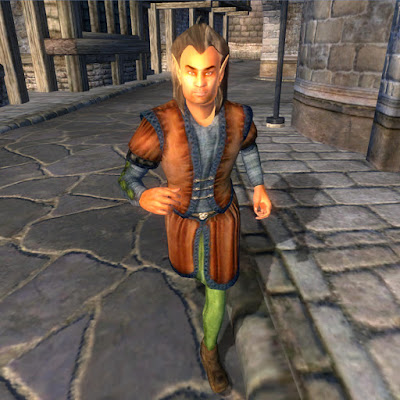 Glar-fear shook off de guard an started runnin real fast down de street, screamin about how de conspirators were finally takin action. De guard shouted an ran after him. Shush waved goodbye to his new friend. Martin had to itch his face again. After a minute, he looked back at Shush.

“Well before...that happened, you were in the middle of a story?” 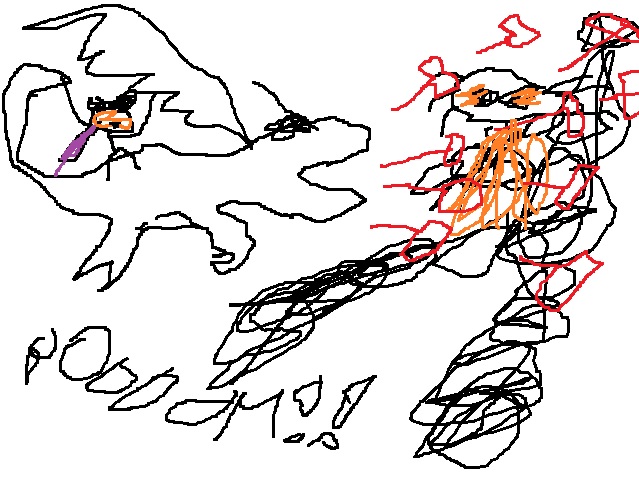 “Without his super strong hammer ta smash up de big mudcrab monster, Shash was scurred an stuff. But den he remembered his super magey powers an used em to summon up a big dragon! De dragon were super huge an strong an instead of fire breath he breathed smashy hammers. Shash got up on de dragon an it wooshed through de sky up to de big mudcrab monster an it shot hammer breath all over an it was all like “BRWOOOOSSSSMASH!” an de mudcrab monster got smashed into little tiny pieces. Den de tiny pieces exploded too an turned into gold coins dat fell from de sky. Shash got all his gold an hammer back an also extra gold an all de mudcrabs in de whole world was dead an all de people liked Shash for bein de best person ever and den it was de end of de story!”

“No. Scary stories don’t just have monsters in them. Instead of happy things, they focus on what we’re afraid of. You know, things like curses and ghosts.”

“Yeah! Dere was dis one time when Shush bought a fancy house in Anvil but den when he woke up dere were lotsa ghosts around his bed. It took forever for Shush to wave fire at dem long enough for dem to leave, an dat was real borin.”

Martin stared at Shush funny. It looked like he had just eated a sour lemon or somethin.

One of de guards had said dat, and was walkin over to Shush and Martin.

“You the two that were waiting for the gate to clear up? Just talked to the men outside, cows all gone now. You can be on your way. Now if you’ll excuse me, I need to help find Glarthir.”

De guard left. Shush got up an went wit Martin out de gate, walkin back towards de road again.

“So Martin, did dat help you wit bein bored?”

Martin sighed an looked up at de sky. “Of all the dangers I’ve met since meeting you, being bored isn’t one of them.”
Posted by Genericide at 8:11 PM