Given that literally all my content on this blog so far has been devoted to games nearly a decade old or older, one could be forgiven for thinking that I am broadcasting to you live from the past, via some manner of blog time capsule. Either that or I live in a cave. Er, a cave surprisingly stocked with video games and consoles from a decade ago. Whatever, you get the idea. However, the fact of the matter is that I do in fact live in the mysterious future-present year of 2012, and frequently interact with these new-fangled jigamawhatsits that are modern consoles.

The problem is that I frequently revisit old games for a number of reasons, and although I’ve also played modern games recently they’ve been fewer in number and, more importantly, harder to write about. You see these games have already gotten tons of coverage recently from people better equipped to speak about them than I, and they’ve also all been really good lately. In my experience I’ve always found bad games or fun but flawed games easier to talk or write about than good ones. Anyway, the point is that I don’t talk about modern games as much as a lot of other people. But now I’m going to, because I want to briefly discuss this year’s E3.

This was clearly the only important part of E3. Alright, we’re done here, go home.

In all seriousness, this year’s E3 was overall a bit disappointing. It had very few announcements for new games that were interesting, especially for someone like me who isn’t entirely enthused by shooters. However, it did have some decent or noteworthy things come out of it, so let’s go through those, starting with entirely new games…

Watch Dogs may have been my favorite new game of the entire show. I generally don’t like shooters but this one seems to be trying something genuinely different and interesting. It’s an open world game set in Chicago. It seems similar to GTA, but with a different tone to the story and a large focus on hacking. The story of the game is largely unknown at the time, but the gameplay demo showed of a lot of what he could do.

The game gives you the ability to hack traffic lights, trains and who knows what else. In addition, you can somehow view a display of people’s pertinent information on the fly. Ideally, the hacking focus could make the game much more tactical and methodical than your standard open world game. There isn’t much else to say about it at the moment, but I’m certainly going to keep an eye on it in the future.

Castlevania: Lords of Shadow 2 was announced a bit before the show began. I had only a minor interest in it before I saw the trailer. However, my opinion was changed after due to a few factors. The first is that I had kind of forgotten about the first Lords of Shadow so this came as a somewhat pleasant surprise. The second is that the trailer is fairly well done in my opinion, especially the music. The third is that I hadn’t finished the first Lords of Shadow (although now I might go back to it) and this trailer contains big spoilers as to its ending which may provide an interesting direction for the next game to go. If you don’t care about the spoiler warning, I recommend seeing the trailer.

So the spoiler is that Gabriel Belmont, the protagonist of the first game and part of the vampire hunting Belmont clan who usually star in this series, is now a vampire. And apparently, given some of the information I’ve found, he’s not just a vampire, but the vampire. Gabriel Belmont is now a vampire who calls himself Dracula. The Castlevania games are set all over the place in terms of time period, ranging from present day to something like a thousand years ago. But despite this, the antagonist is almost always Dracula or someone related to him. There are a lot of directions this could go, canon-wise. He could be simply an incarnation of Dracula or it could be retconning him into the one and only Dracula (who I’m pretty sure already had an origin story previously).

Regardless of how the story is going, however (because I’m sure not many people but me care about it), this could affect the gameplay of the game in some interesting ways. You conceivably still be playing as Gabriel in this, and I for one think that playing a Castlevania game as Dracula could be completely awesome.

There’s some conjecture as to who Gabriel faces at the end of the trailer, but I’m betting on it being Alucard, Dracula’s do-gooding son in previous games. This is because there was announcement for another game for 3DS, Castlevania: Lords of Shadow, Mirror of Fate. Apart from being a mouthful, the game is set to be different from its console counterpart in that it has both 2D and 3D segments. The game also announced you would be able to play as Trevor Belmont, Simon Belmont, and Alucard. If this game had you play as the good guys and the console one had you play as the villain it could be an interesting game indeed. At any rate, I always like a good Castlevania game (particularly the 2D ones), so I’ll probably get at least one of these when it ships. 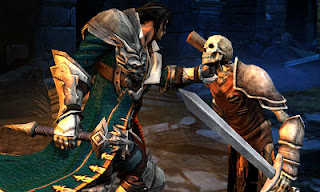 Whew. This is getting a bit rant-y, so I’ll speed things up. Pikmin 3 is like Pikmin and Pikmin 2, but another one. No complaints there. Project P-100 is a Wii U game where you can turn into a fist and hit giant robots, which seems awesome. ZombiU is a Wii U survival horror game which looks interesting for two reasons. The first is the fact that you die in one hit may make it an actual survival horror game as opposed to the survival action games we’ve been getting lately. The second is that it has a multiplayer mode in which one person with the Wii U gamepad controlling the zombie horde while the other players try to survive, which is an idea I quite like. New Super Mario Bros. 2 interests me more than New Super Mario Bros. Wii U, because its focus on coin collection and lack of multiplayer will probably mean it’s a bit harder and more tightly designed. Both are potentially good, although the newer 2D Mario games haven’t enthralled me quite as much. A 2D platformer I’m excited about more is Rayman Legends, a sequel to the in my opinion fantastic Rayman Origins. 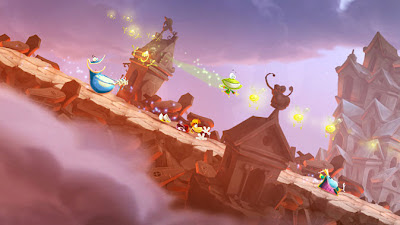 This was announced a while ago but I liked the first enough that I’m mentioning it anyway.

Tank! Tank! Tank! is a Wii U title in which you play some manner of unknown vehicle, blowing up giant robot spiders and hydras and so forth. Seems a bit arcade style, so potentially too short to get your money’s worth. However, still looks quite fun. Lego City: Undercover looks to be Lego mixed with Grand Theft Auto. The open world city, tighter platforming and parody of cop films angle have actually garnered some interest in me, despite it being a lego game. Beyond: Two Souls is another game from the maker of Heavy Rain. Despite having a somewhat interesting story involving a person with a ghost companion it just didn’t interest me much. Perhaps I’ll be more excited when more details emerge. Nintendo Land, despite clearly being aimed at a more casual audience with its collection of smaller mini-games, is still set to be a more interesting console pack-in game than Wii Sports (assuming it’s a pack-in). The focus on Nintendo IPs (intellectual properties) and the mini-games shown off so far seem to be slightly less the ‘casual’ of Wii Sports and more the ‘everyone’ of Nintendo games, if you follow me. Nonetheless, it was a disappointing way for Nintendo to end its conference. 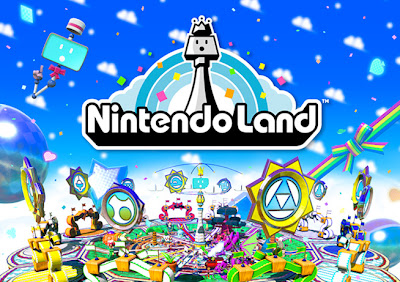 This might even be fun, but it’s not going to convince any hardcore gamers to buy your console

And that more or less covers interesting games that were newly announced this E3. You may have noticed that apart from the first two, those were all Nintendo games. I’m somewhat biased in this sense, because I’m not a fan of shooters, but there’s another reason for this. The Wii U is a brand new console coming soon, and even if the launch line-up isn’t spectacular Nintendo has to announce some new games. Microsoft and Sony, on the other hand, pretty much just stuck to what was already announced a while ago.

Last of Us, Luigi’s Mansion: Dark Moon, Paper Mario: Sticker Star, Scribblenauts Unlimited, Halo 4, Call of Duty: Black Ops 2, Far Cry 3, Resident Evil 6, Tomb Raider, Dead Space 3, Assassin’s Creed 3, Borderlands 2, Metal Gear: Revengence (I can never say that name and not smirk) Dishonored and more were all big budget games that appeared at the show. But there are some things to notice about those titles. The first is that they’d all been announced prior to the show, with the exception of Call of Duty: Black Ops 2. And this year’s Call of Duty isn’t exactly a mind blowing announcement. The second is that there are quite a lot of shooters, which you think I’d be used to by this point but I’m not. The third is that only two of them aren’t sequels.

Of course some of those games may certainly be fun, especially to gamers with more enthusiasm for shooters than I have. And I’m absolutely thrilled that I’m getting Luigi’s Mansion and Paper Mario this holiday season. Not to mention there are always some more obscure games that pop up that don’t get coverage, and I know there are some games I’m missing here. 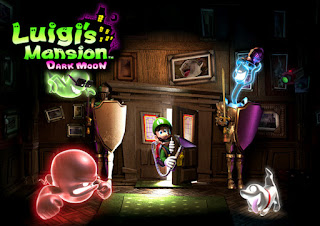 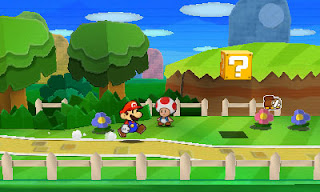 That these two are coming out this year is all I need, really

This E3 wasn’t absolutely terrible or anything, there just weren’t many announcements at the show that were both new and/or genuinely interesting. Sure there’s incentive for companies to get out news about their games, new technology and so on. But if almost nothing at the biggest gaming show in the year is actually a new announcement, it becomes a bit of a disappointment for gamers themselves. E3 is a press event, and has never been about just dedicated gamers. Nonetheless, the decreased focus on our demographic makes it harder to get excited about.
Posted by Genericide at 3:27 PM