There are some times when I realize that I have far too many games to play. When I realize that I have so many dozen things I could be doing that I responsibly resolve to finish what I’m already doing. When I am tempted to buy or play a new video game but resist because I clearly have too much willpower and self-control for such things, and instead will dutifully and mechanically work through my list of things I already was going to do. This is not one of those times. Instead this is a time where I bought Spyro the Dragon instead. 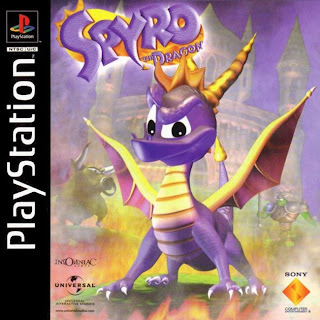 And when I think about it, I can’t actually remember one of those other times…

Fortunately, this is one of those times where I didn’t regret my decision in the slightest. With some of the money I had stored on Playstation Network I bought Spyro the Dragon for $6 and spent an enjoyable few days blazing through to 120% completion. It was quite a fun game and I’m going to try and describe why, because that’s a thing that I do.

Spyro the Dragon was a game released in 1998 by Insomniac games. I had no idea until now that Insomniac, who also later made the Ratchet and Clank series (which I quite like) and the Resistance series (which I haven’t played), were the ones originally behind Spyro. As a kid I knew people who owned Playstations and saw them play Spyro the Dragon, but owning only a Nintendo 64 at the time I never owned the game myself. Knowing that I certainly wouldn’t get a good recent 3D platformer any time soon, combined with the appealingly low price, I decided to make up for lost time. I know that I could no doubt easily find an emulator for this type of thing but I guess I’m old fashioned in the sense that I like to pay for things I enjoy.

And enjoy the game I did. Spyro the Dragon is an excellent example of high quality 3D platforming. The story is light as the tone, which is considerably, but not in a bad way. The villain seemingly only turns all the dragons (apart from young Spyro) to stone because they called him ugly in a television interview (which they apparently have). The plot mostly comes down to getting the bad guy and everything else is just a light sprinkling of pieces of gameplay advice and jokes. You see every time you release a dragon they have a bit of voiced dialogue to impart. Sometimes these are useful hints towards gameplay, sometimes these are obvious hints towards gameplay, and sometimes they’re jokes about how hilarious it is that Spyro doesn’t like old people. 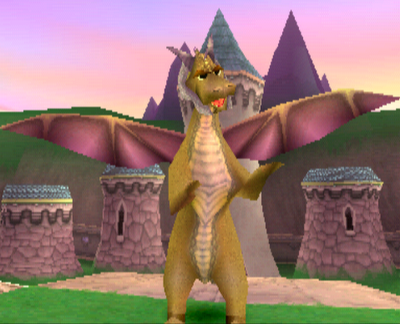 Haha! It’s funny because old people are boring and Spyro doesn’t want to talk to them because they’re boring!

I swear that particular joke is redone half a dozen times or so and kind of wears out its welcome, but the rest of the dialogue is usually at least somewhat amusing. But look at me, describing the paper-thin story elements and I haven’t even talked about the controls yet. Spyro has the usual ability of platform game stars to move around and jump, but also has a few additional skills that set him out from your standard 3D platformer in the gameplay department. He can flame the area directly in front of him, use a charge attack or glide after a jump. Some enemies, usually armored, are immune to flames. Other enemies, usually large ones, are immune to being charged.  You move faster while charging but flame has a wider area of effect and leaves you less likely to get hit if you miss. The two attacks are well thought out in that they can accomplish things differently even when both are viable options.

Gliding, meanwhile, completely changes up the way levels can be arranged. Being able to glide across gaps allowed the level designers to create areas that were nearby but inaccessible due to elevation. It lead to all sorts of secrets only available by proper application of the technique and gave the levels a wonderful feel of being interconnected. Even when the stages are fairly linear the game often keeps it from feeling that way by having the player cross in and out of areas they’ve already been via gliding. The stage design in general isn’t completely linear and has plenty of branching paths and side areas to collect the three collectibles in the game (treasure, dragon eggs and imprisoned dragons).

Let me give you an example of what I mean. On one of the stages in the Magic Crafters world (the third one) I saw a few ledges I couldn’t get to as I went throughout the stage. I found several secret areas with extra loot but never found a way back to those ledges. I went back and examined everything carefully only to find that if I glided around a wall near the start of the stage I could get to one of those ledges. And then that ledge had a path to the other ledges, side platforms, and areas I didn’t even know about that wrapped about the walls and rooftops of previous areas I explored. To discover these things that were hiding right under your nose via clever use of the techniques you’ve been taught is a great feeling. 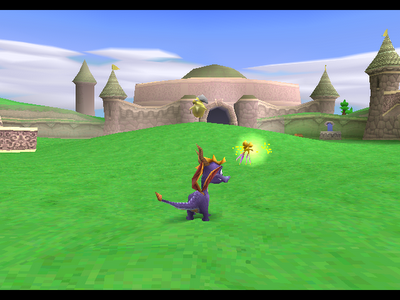 The first area in the game showcases this as well. See those walls and that building that are clearly meant to keep the player boxed in? In a later area you can reach a point high enough to glide on top of them and run around collecting secrets.

So that’s the best part about the gameplay, but it neatly transitions into what’s probably the worst. Although the wealth of hidden secrets in the game is awesome for people who love exploration, it can be quite frustrating when you have no idea where to go. To be fair, this is only really a problem if you’re going for 100% completion, as the way to the end of the stage is usually fairly obvious. But self-respecting gamers like me who want to grab every piece of treasure will no doubt have some point in the game where they throw up their hands in frustration and look up a walkthrough; because even the cleverest among us might have difficulty realizing that you were supposed to, say, chain several supercharges to get big jumps and glide in a certain pattern about the stage to get a glide long enough to fly to some obscure piece of background which was actually a hidden area.

The second biggest problem is that a few jumps in the game are, simply put, too difficult. It occurred multiple times that I would blaze through stages without dying accumulating like a dozen extra lives and then lose almost all of them to one particular jump or sequence of jumps. Sometimes the designers make the gaps almost exactly the literal distance you can jump and glide to if you time things absolutely perfectly, and the result is nothing but frustration. There are some other minor moments of annoyance but generally any problems other than these two are so minor they’re not worth mentioning. 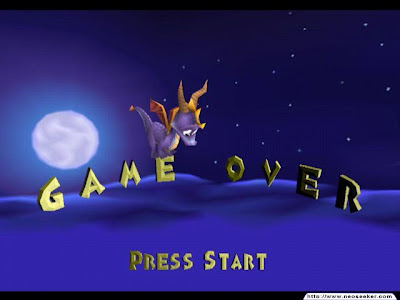 I think I only saw this screen twice, and both times were for some precise glide jumping shenanigans like those mentioned above

The visuals of the game are relatively good, though certainly a product of their time. The graphical limitations usually don’t keep the game from looking visually appealing because the stage design still looks colorful and imaginative and varies a lot between the many stages of the game. It can occasionally degrade things, however. The game seems to reform objects in the distance into more basic polygons. This would be fine, but given how fast you move when gliding or charging you can see this happening in front of you in real time quite often. 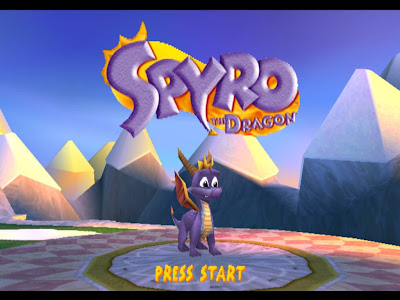 The mountains in the background of the title screen are a good example of what far-off objects look like in this game. You could shave with the edge of that snow.

Despite their economy of far off objects, Spyro the Dragon lags a fair amount, which is kind of a problem. The lag is usually fairly slight and obviously affects the whole game world rather than just you, this being a single player game. So the gameplay isn’t that worse for wear due to it, but what actually suffers most is the music. I quite like the music in this game. It’s got a unique feel that mixes oriental sounding bells and strings with drums and electric instruments. Before I proceed I’ll just share some of my favorite examples with you.

Jacques is the penultimate boss of the game, and his stage has a faster version of the games title theme

Dream Weavers is the penultimate hub world of the game, and has some excellent music

Dark Hollow is a mellower piece from earlier in the game, and thus a good contrast to those last two

Alpine Ridge is a stage from the middle of the game with nothing special about it; I just love the music so I had to throw it in

Now after listening to some of those songs you may realize something. A large portion of the games songs are fairly fast paced, and even the slower ones usually have some faster paced portions in the background. This means that every time the game lags, the music quite audibly starts to chug. It’s worse in some places than others, but some of the huge stages in later parts of the game clearly suffer for it. I was once or twice actually motivated to clean up enemies purely because they were screwing up the pacing of a song that I liked.

There are a few miscellaneous aspects of the game I haven’t mentioned, so let’s just go through them quick: Some of the stages are flying stages where you can fly in any direction, and are tasked to go through hoops and torch things in a certain time. Not much to say about these, they’re pretty standard mini-games that serve as a decent break from the regular game. The hub worlds are sort of like stages in their own right, filled with treasure to collect, which is an idea I like. The boss fights are kind of disappointing, usually just being an enemy you chase though a stage and occasionally hit when they stop moving. Some are better than others, but overall they’re not particularly interesting. The game has a nice little bonus stage and alternate ending when you get 100% completion, which is nice. 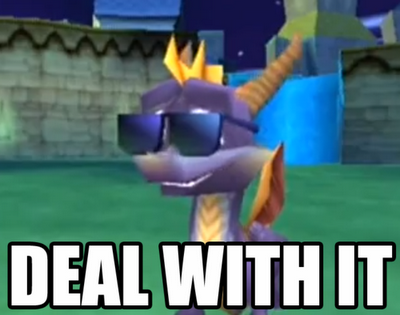 The alternate ending also includes this image, which I feel morally obligated to include in this review

So that about sums it up. Spyro the Dragon is a game with some minor flaws and frustrations that fail to keep it from being colorful, interesting and fun. It has excellent music, a unique approach and fills its levels with goodies for clever players to explore. If you like 3D platformers I highly recommend you pick it up. Of course, it being hugely popular in its day my endorsement probably holds about as much significance as someone declaring breathing oxygen to be pretty cool, but I wanted to say it nonetheless.
Posted by Genericide at 1:51 PM