Video games are a medium we all love here at Genericide Entertainment, as I’m sure you do too. But dear readers, there is a troubling trend that can be seen lately in the games industry. People reporting on games took a while to hit their stride, and it seems their juvenile beginnings are showing once again. There are cries all across the industry of game reviewers not reviewing games properly or even getting paid off for giving their reviews a certain score. Genericide Entertainment does its best to be the moral watchdogs of the gaming community, and will assuredly cover absolutely any rumors of corruption in games as soon as it hits, repeatedly over and over until a verdict is reached. But we worry that even our guiding presence won’t be enough. 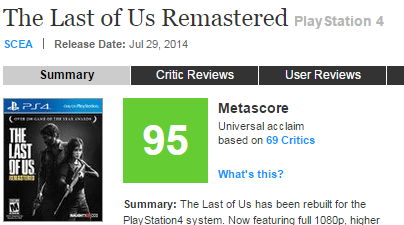 Even fantastic games, like The Last of Us, don’t seem to get 100s on Metacritic. Highly suspicious.


But perhaps an ever worse trend of the games industry as of late is the decline in overall quality. Games journalists used to have some sense of self-respect and duty towards good reporting. These days, gaming sites are taking the easy way out with meaningless filler, eye-catching clickbait and more. They flaunt controversy in people’s faces, trying to make a quick buck off of clicks and benefitting from making people angry. These shameful practices make gaming look like a joke to those who look in on it from the outside, and make gamers themselves look like a bunch of entitled children. We as a medium deserve better than that, so Genericide Entertainment is taking a step forward to deal with this. We’ll be writing a new article on the recent fails of the games industry every week to keep them in line, even more if we have to! But we need the help of viewers like you to really bring about change in the industry. So be sure to share our articles on social media and inform all your friends of Genericide Entertainment so together we can save the games industry! Remember: You can trust us, and nobody else.

Now that you’ve done your duty and improved the games industry by viewing this internet article, why not kick back and relax with First Mushrooms, Now This? 7 More Blazed Game Characters? For something even crazier than that, take a look at 9 Cats That Don’t Give a Fuck, And Also Video Games Are Involved Somehow! Just remember to come back to Genericide Entertainment as your one-stop shop for all things games, constantly, every day, multiple times.

[This page is a work of parody]
Posted by Genericide at 3:50 PM